blurring the line between the ludic and the ludicrous

Who made Foodways Darmstadt?

Ute Ritschel modeling a one-of-a-kind hat designed and made by Susanne Schmitt.

Many people contributed to the success of Foodways Darmstadt.  First and foremost, was Ute Ritschel, without whom this work would not be possible.  Not only did she invite us to be artists-in-residence at the Internationales Waldkunst Zentrum and to develop Foodways Darmstadt as the tenth KunstTREFFpunkt, but she was also an invaluable collaborator, whose vision of the Darmstadt foodscape and extensive local network gave shape to the project.  Moreover, in the absence of a fixer/translator, Ute gave generously of her time (and a point in her life where she had many other conflicting obligations) to help us at every appointment we had with a potential collaborator who did not speak English. She also painstakingly translated document after document for us into German (announcements, posters, press releases, web pages, and schedules) and reviewed translations by others to make sure they were “round.” Most importantly, she created the final event of the day, which was also the final event of her remarkable Vogelfrei project.

Ute and her husband Jurgen Heinz went made us welcome with dinners in their home and meals in restaurants and they lent many of their personally owned amenities: mattresses, bedding, and cookware to make our life more comfortable. Jurgen is also be thanked for his patience during all the hours that our project kept Ute out of the house and many kinds of technical support, from updating the websites to repairing the telephones.

Michael Kirschner was our indefatigable translator, accompanying us at the market and on our tour (and also for our visa interview which we’ll discuss in a future post). His patient demeanor drew many people into the project that we would not otherwise have reached and he had a special talent for locating routes on our maps after we stripped out all the textual references.  He knows the project almost as well as we do ourselves.

Christiane Dette in foreground. Ursula Wickop next to Michael.

Similarly, Christiane Dette, our most enthusiastic participant, also translated on market days.  Her exuberance very much widened the scope of our audience. Plus she also cooked an amazing dinner for us at her home. Ursula Wickop was another patient and reliable translator.  We are also grateful to people who gave advice and made contacts that kick-started the project, including Roger Rigorth, Uschi Ewald, and Family Lesser.

Of course the project would not exist without our site-collaborators mentioned above, but we want to give a special shout out to Monika Muller and Marion and Chris Pepper, creative food professionals who said yes to us right away and thereby made us confident that the project would happen.  Monika also gave us a good picture early on of the Darmstadt food network and many of our final choices for the symposium came to fruition because of her contacts.

Horst Dieter Bürkle designed the announcement postcard using a photo that Catie Rutledge took for us with our students in Florence. Rolf Gönner ran himself ragged taking several hundred photos of the parade. Daniel Bräg also jumped in to document the parade and to help in many other ways. Johannes Breckner has written generously about our work this year as well as in the past.  Hans-Peter Wollman created terrific youtube video for all three parts of the project and also recorded the messages we will carry forward to Australia. 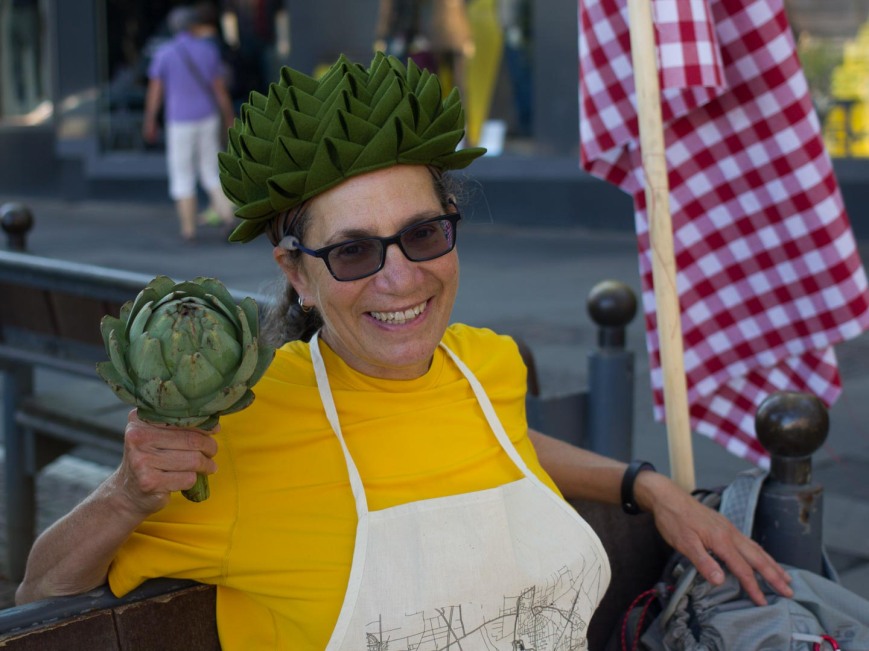 We are indebted to every one of the hundreds of people who contributed lines to our maps and shared the stories of their foodways with us.  You are the heart of the project.  We especially appreciate all thirty people who were willing to march single file carrying vegetables through the city center, and give in the parade, especially Anna and Imanuelle and Tamara and her sister Saskia who wrangled the wheelbarrows full of produce and aprons.  Special thanks to Anna, Ute, Christiane and Ursula who baked for the picnic.

Special recognition goes to Elke Joergeling, who stepped away from her market stall to carry their honey in the parade. [Photo Ute Ritschel]

At the IWZ, we thank Michael Feike for translations, Lili Polster for her enthusiastic participation in the events, Anna Chechel for warmth and help in the office, Peter Prossman for technical support and for letting us take over his shop for more than four weeks.

The team at Copy Cosmos (especially Thorsten and Dieter) were patient with all our print jobs and how found great solutions to every crisis.  Without them, there would be no maps and no aprons.

One thought on “5. Foodways Darmstadt Thanks/Credits”